Did somebody just try to buy the British government? 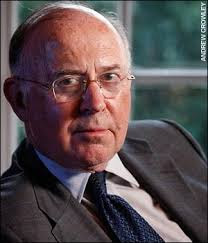 Hansard is the official printed transcript of the proceedings of the houses of parliament — in other words, the working log of the British government.
It is an authoritative primary source, and records every speech made in the House of Commons and the House of Lords. Interestingly, it also records words spoken under parliamentary privilege.
So when an eminent member of the House of Lords stands up six hours into a debate and blows the gaff on a shadowy foreign Foundation making a bid to buy the British state, and this is recorded in Hansard, one tends to sit up and take notice. And one takes even more notice when His Lordship tip-toes around actually naming the Foundation in question, especially after the throw-away about money-laundering for the IRA on behalf of the Bank of England. Parliamentary privilege only stretches so far, it seems, and Foundation X is beyond its reach. I'm going to quote at length below the cut — if you want to read the original, search for "1 Nov 2010 : Column 1538" which is where things begin to tip-toe into Robert Ludlum territory.
(NB: The venue is the House of Lords, at 10:42pm on November 1st, 2010.)

Lord James of Blackheath: At this point, I am going to have to make a very big apology to my noble friend Lord Sassoon [Treasury Minister], because I am about to raise a subject that I should not raise and which is going to be one which I think is now time to put on a higher awareness, and to explain to the House as a whole, as I do not think your Lordships have any knowledge of it. I am sorry that my noble friend Lord Strathclyde [Leader of the House] is not with us at the moment, because this deeply concerns him also.
For the past 20 weeks I have been engaged in a very strange dialogue with the two noble Lords, in the course of which I have been trying to bring to their attention the willing availability of a strange organisation which wishes to make a great deal of money available to assist the recovery of the economy in this country. For want of a better name, I shall call it foundation X. That is not its real name, but it will do for the moment. Foundation X was introduced to me 20 weeks ago last week by an eminent City firm, which is FSA controlled. Its chairman came to me and said, "We have this extraordinary request to assist in a major financial reconstruction. It is megabucks, but we need your help to assist us in understanding whether this business is legitimate". I had the biggest put-down of my life from my noble friend Lord Strathclyde when I told him this story. He said, "Why you? You're not important enough to have the answer to a question like that". He is quite right, I am not important enough, but the answer to the next question was, "You haven't got the experience for it". Yes I do. I have had one of the biggest experiences in the laundering of terrorist money and funny money that anyone has had in the City. I have handled billions of pounds of terrorist money.
Baroness Hollis of Heigham [Labour]: Where did it go to?

I am left rubbing my eyes.
Did a not-obviously-insane member of the government — a corporate troubleshooter and Conservative life peer — really just stand up in the House of Lords and announce that a shadowy Foundation (that might or might not represent the Vatican) was offering the British government an investment of umpty-billion pounds in order to reboot the economy — free, gratis, with no strings attached?
Or am I just imagining the "no strings attached" clause?