Central Banks have Trapped us in a Life of Debt 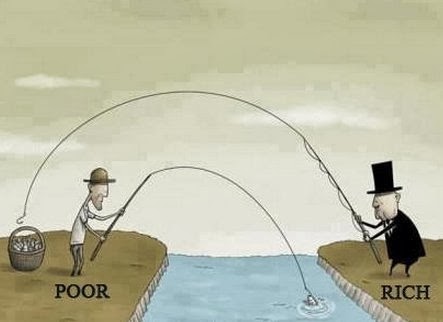 In the movie The Matrix, Morpheus offers Neo a choice: take the blue pill and remain in ignorance of the illusion, the fabricated reality of the Matrix, or take the red pill and embrace the sometimes painful truth of reality, which would allow him to escape from the Matrix and experience the real world. More and more people are “taking the red pill”, discovering the truth about the global monetary system. And many are no longer content to simply remain ignorant and enslaved by a matrix created by a global financial system designed to keep 99% of the world’s people from true personal and financial freedom.

The truth is out. People around the globe are waking up to the reality of the “real world” – in which “money” is no longer backed by gold reserves, making it essentially worthless. Instead, private central banks, as well as individual financial institutions, use the fractional reserve system to create “money” from thin air, based on “promises to pay”.

Instead of governments issuing interest-free money, they are borrowing “money” at interest rates (which we now know are manipulated) from privately-owned central banks, enslaving their populations into debt to these private corporations for generations.

It is a system that has been vehemently opposed by many, who paid the highest price for their attempts to free the people from this wicked system. Benjamin Franklin, founding father of the United States explained the Revolutionary War as follows: “The refusal of King George III to allow the colonies to operate an honest money system, which freed the ordinary man from the clutches of the money manipulators, was probably the prime cause of the revolution.” Many leaders have been assassinated and countless soldiers have died in wars designed for one purpose: to enslave the people to private central banks to ensure untold riches for their private shareholders.

As such, the debt can never be repaid. By simply “printing” ever more “money”, not backed by gold reserves but simply based on “promises to pay”, central banks create inflation and enslave entire populations with huge debts for which each and every citizen becomes personally liable. Not only do governments need to raise ever-more taxes to service the interest on the debts they make on behalf of the people, this debt must also be repaid, and this, as the people of Cyprus recently discovered, can and will be done by appropriating money from the bank accounts of private citizens.

The Debt House of Cards created by the US Federal Reserve, a privately-owned central bank authorised to issue “money”, recently quivered ominously, as the US government needed to raise the debt ceiling: the cap on how much the US government can borrow to pay its bills, to avoid defaulting on its debt. The US government borrows at interest in most years, because its spending has long since exceeded its revenue.

Since the first borrowing limit was imposed in 1917, it has been raised 77 times and now stands at more than $16 trillion. If the US defaults on a debt payment, the result would be catastrophic, because banks all over the world use US Treasury Bonds as collateral when borrowing from each other. If this collateral is no longer risk free, it would disrupt borrowing and throw the credit markets into crisis. Because the banks hold much of their capital reserves in Treasuries, if these dropped in value, banks would have to cut back on lending. Bear in mind, this crisis is not over by any means, it has merely been postponed...

The financial crisis of 2008 has exposed various abuses by banks, including the reporting of false interest rates and the hiding of junk home loans in derivatives sold as high-quality assets, which set in motion a global economic crisis.
Recently, the European Union imposed a record 1.7-billion euro in fines on well-established and “trusted” banks for rigging the Euribor and Tibor rates, which affect vast sums of money around the world. This followed the global scandal regarding the rigging of the London Libor rate, the benchmark rate that underpins the terms of $500-trillion of contracts ranging from mortgages to student loans around the world.

In the US banks have been fined millions of dollars and securitisation has been declared illegal. Recently, Australia’s largest ever consumer class action lawsuit began in Melbourne, with bank customers fighting for the return of more than Aus $240-million (US$220-million) in banking fees.

But do not for a moment think that these are “overseas” problems. The situation here in South Africa is no better. The South African Reserve Bank (SARB) is also a privately-owned central bank, operating only for the benefit and profit of its private shareholders. In fact, the SARB has “printed” more money than the US Federal Reserve, in relative terms, over the last few years.

You can read more about this in an explosive book recently published by A Motiar entitled The Reserve Bank = A License to Steal Money From Citizens. It exposes how SARB makes debt-slaves of the majority of South African citizens, using the fractional reserve system to create “money” out of nothing, solely for the benefit of its few private owners.

Kevin Wakeford, the CEO of of what is now called the South African Chamber of Commerce and Industry, blew the whistle on three big corporates and one global bank for manipulation in the currency markets. As a result of Wakeford’s intervention, a Rand Commission was set up to investigate and the rand’s collapse was arrested and reversed. Wakeford, interestingly, was fired, not thanked, and the Rand Commission was shut down prematurely. The book also explains more recent banking scandals around the world, giving a hard-hitting exposé of greed, collusion and manipulation in the markets.